“SIDDHARTHA is a searcher. I want to be this in my music as well – a seeker of new sounds and musical expressions.”
Johannes Tonio Kreusch

Described by the Süddeutsche Zeitung as “Classic Newer”, the duo’s current program is primarily dedicated to classical tango music from Argentina. The focus is on two tango cycles: the three-movement “Tripticon porte’o” dedicated to the duo by the Argentine tango composer M.Ximo Diego Pujol sets the scene for well-known places in Buenos Aires. This three-movement work is a modern answer to the program’s second tango cycle, the Tango Suite “L’Histoire du Tango – The History of Tango”. With this four-movement work, the tango revolutionary Astor Piazzolla describes the development alder of tango musically. These cycles are framed by Spanish masterpieces by Manuel de Falla and Enrique Granados.

An unusual double concerto in the field of tension between jazz and classical music. The internationally successful Munich brothers, the jazz pianist Cornelius Claudio Kreusch and the classical guitarist Johannes Tonio Kreusch have earned an international reputation for being masters of their field. Cornelius Claudio Kreusch was hailed by the Süddeutsche Zeitung as a “highly savvy virtuoso and gifted improviser” and his brother Johannes of Acoustic Guitar Magazine was described as “one of the most creative classical guitarists of the present day”. Both have completed their music studies at well-known music academies in New York, released many successful CDs and perform at major festivals around the world. The Kreusch brothers are also active as festival makers, producers and music managers.

The jazz pianist, composer and producer Cornelius Claudio Kreusch, whom the Boston Globe calls “a pianist who sounds like no other. Endlessly fascinating to hear.” has released more than 20 albums under his own name and has worked with artists such as Herbie Hancock, Bobby McFerrin, Salif Keta, Kenny Garrett, Bobby Watson and Greg Osby.

Duo programs and festival evenings with fellow guitarists such as Carlos Barbosa-Lima, Máximo Diego Pujol and others. 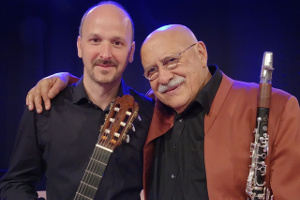 For this program, Giora Feidman has brought a master of soft tones to the side. Together with guitarist Johannes Tonio Kreusch, Giora Feidman brings a medley of works from Franz Schubert to Astor Piazzolla and Yiddish songs to the stage, proving once again that there are no stylistic boundaries for him. The two musicians enter into a musical dialogue full of sensuality and power, creating moments that celebrate the beauty of music with their melancholy and lightness. Here, in all facets, what the great artist understands by Klezmer is evident. He attributes Klezmer to the two Hebrew words “kli” (instrument) and “zemer” (song). To express this natural power, we need an instrument, our body. “I communicate my inner voice, an idea, a feeling to others. A klezmer does not play, he sings. Music is understood in every place in the world, by all people, regardless of religion, skin color or language.” With this maxim he creates a concert program of great unity, vibrancy and charm. As a matter of course, the most diverse music and styles stand side by side, inspire each other, and shine in a new and unheard-of light.